Showdown! Making Modern Unions (Between the Lines, 2016), by Rob Kristofferson and Simon Orpana 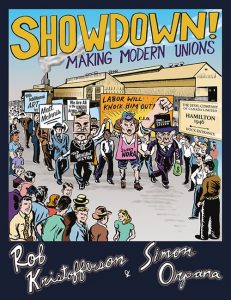 From the publisher’s website: “Seventy years ago, thousands of North American workers took a stand for a better life. And they won. In 1946, in the United States, over a million workers in the steel, meatpacking, and electrical industries put down their tools and walked out; and striking Canadian workers tied up provincial rubber and logging industries, the Southam newspaper chain, central Canadian ports, and the national steel industry. Workers in Hamilton, Ontario hoisted picket signs at Westinghouse, Firestone, Stelco, and The Hamilton Spectator, and with the support of rallying friends and neighbours, turned the strikes into a community-wide struggle for decency, respect, and security.

Based on interviews and other archival materials, this graphic history illustrates how Hamilton workers translated their experience of work and organizing in the 1930s and early 1940s into a new kind of unionism and a new North American society in the decades following World War II.”