New Publication | Unions in Court: Organized Labour and the Charter of Rights and Freedoms

Unions and the Courts: Organized Labour and the Charter of Rights and Freedoms (UBC Press), by Larry Savage and Charles W. Smith 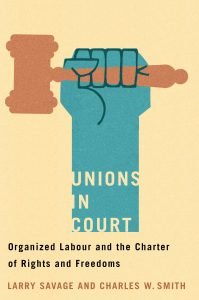 Since the turn of the twenty-first century, Canadian unions have scored a number of important Supreme Court victories, securing constitutional rights to picket, bargain collectively, and to strike. Unions in Court: Organized Labour and the Charter of Rights and Freedoms documents the evolution of the Canadian labour movement’s engagement with the Charter, demonstrating how and why labour’s long-standing distrust of the legal system has given way to a controversial Charter-based legal strategy. This book’s fresh take on constitutionalized labour rights will have critical implications for the labour movement as well as activists in other fields.